Japet – Evolution of exoskeletons in companies

Benoit Sagot-Duvauroux, head of GOBIO – Europe Technologies, explains everything about the evolution of exoskeletons in companies. 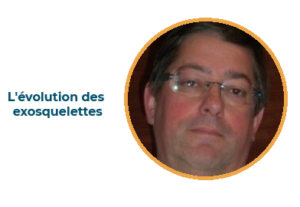 Exoskeletons are physical assistance devices whose use is becoming more and more common in companies.

They assist or relieve operators in physically demanding tasks in order to reduce the risk of musculoskeletal disorders (MSDs) or to keep employees suffering from pathologies in their jobs.

But how have these new technologies evolved? How has their image changed? And how have companies’ views on exoskeletons progressed?

We went to meet Benoit Sagot-Duvauroux, head of GOBIO – Europe Technologies, dedicated to the marketing and development of exoskeletons, so that he could explain everything about the evolution of exoskeletons.

How has exoskeleton integration in the enterprise evolved?

In the early 2010s, a craze for exoskeletons began to emerge. This technology aroused interest with the appearance of the first robotics trade shows.

Subsequently, it was the large industrial groups such as Airbus or Naval Group that, in a way, launched the exoskeleton movement. Their policy was to buy everything that existed in terms of exoskeletons. The objective was to test and then sort out the products offered. At the same time, the AFNOR (Agence Française de Normalisation) was encouraged by these large groups to characterize exoskeletons and provide a normative framework for their use and design.

Test phases were necessary to validate or invalidate the exoskeletons. This initial feedback allowed other companies to learn about the use of these new technologies before the market expanded to other sectors such as logistics or construction.

Now that exoskeletons are more widely available, any type of company, whether it is an SMB (Medium Size Company), a SME (Small and Medium Enterprise) or an individual structure, can be interested. The test phases and the feedback from users have allowed us to better target the relevance of the exoskeleton for a specific application. Since 2020, the first deployment phases have been observed.

What about the image of the exoskeletons?

A lot of education was necessary to break the Iron Man image of exoskeletons.

Today, exoskeletons are better understood thanks to the many trade shows, workshops and documentations that have been set up. Indeed, the latter have made it possible to highlight their interests but also their limits.

At the same time, the increase in the number of products sold has given rise to numerous feedbacks: users have been able to integrate the exoskeleton more efficiently into their MSD problems.

However, other questions have been raised about the use of exoskeletons. Mainly, whether there are transfers of MSD problems to other parts of the body. It is therefore necessary to have a serious approach with analyses and data that can be justified. To do this, many studies have been carried out, whether by the INRS or by companies that design or use exoskeletons.

At the very beginning, the proposed products were far from being industrialized. We were in the very early stages of product development. Manufacturers were looking for partners to market their products and the market was listening to feedback from the field in a test and learn perspective.

At the start, the ergonomics of exoskeletons were not optimal : they were considered heavy, not very adjustable, not covering all sizes, long and difficult to put on. The comfort of these exoskeletons was not unanimously accepted by users.

Design companies therefore had an important role to play in improving the parts and modifying the defects in use in order to offer operators the product best suited to their needs. The devices are therefore evolving towards a process of reliability.

Thus, for the exoskeletons under development, different areas of improvement have been sought : reducing their weight, facilitating their adjustments, mitigating heat problems or acquiring different sizes of devices. However, it is necessary to take into account the time needed for companies to develop these complex products.

At the same time, there is a real policy of lowering prices, whether this is due to the amortization of research and development (R&D) or to an increase in quantities, which makes it possible to lower the cost price. Finally, competition is increasing: if the competition comes out with a much cheaper product, the question of price alignment must be asked, or else we must be able to justify that the product offered is more expensive.

What developments we will see in the future ?

In the future, we can think that there will be two main developments : 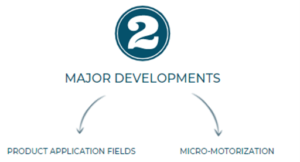 Exoskeletons have an obvious place, because despite robotization, there will always be strenuous manual activities. In addition, societal issues such as the aging of the population or the extension of working hours will place the exoskeleton as a front-line solution.

Companies are going to have to find ways to attract new talent so that the exoskeleton is part of the solutions to improve health, safety and well-being in the workplace.

GOBIO was founded in 2014, by Benoit Sagot Duvauroux, before being acquired in 2017 by Europe Technologies. It was one of the first exoskeleton distribution companies that came into being. Today, they are the leader of exoskeleton range distribution in France.