Simulation – Impact of the Japet.W exoskeleton on the movement

Back pain, often referred to as the “disease of the century”, is becoming increasingly important in industrialized countries. Indeed, according to data from the National Institute for Research and Safety (INRS), more than two out of three employees have had, are having, or will have low back pain in France (INRS, 2018). Low back pain appears to be a pathology with multifactorial origins to which several risk factors are associated, including manual handling, falls, awkward postures, heavy exertion, etc. Many many factors can be found in the workplace, all sectors combined. Low back pain accounts for 20% of at-work accidents and 7% of occupational diseases, resulting in nearly 11.5 million days of work not completed per year.

To limit the risk of low back pain in the workplace, some companies carry out ergonomic studies to better adapt workstations. When a further improvement of the work environment is impossible to realize, new solutions such as exoskeletons can be considered. The objective of this study is to analyze the impact of the Japet exoskeleton on the L4L5 intervertebral disk, related to frequent movements during manual handling.

This musculoskeletal simulation was carried out with the AnyBody Modeling System software, using a full-body model (AnyBody Managed Model Repository, AMMR). This model is widespread in the research world, more than fifty scientific publications refer to it (AnyBody Technology). Many researchers have used this software to study the efforts in different joints, and in particular in the spine (Zee, 2007) (Rajaee, 2005) (Rasmussen, 2009) (Bassani, 2017), taking as reference the in vivo measurements made by Wilke et al. (Wilke, 2001).

This study evaluates the impact of the Japet exoskeleton on the force exerted in the L4L5 disks according to different parameters: load location, load mass, as well as body position during load carrying.

AnyBody Technology offers its community the WilkeSpinalDiscPressure library. This one is composed of three files that we used as a basis: “Standing Lift Close”, “Standing Lift Flexed” and “Standing Lift Stretched Arms”. The Japet exoskeleton was implemented in each of these models. The efforts provided by the exoskeleton are 4kg per actuator (a total of 16kg).  To perform a rotational movement, the pelvis/thorax segment follows a B-spline curve allowing a rotation of the trunk ranging from 0° to 25°. Finally, as the disk is represented by a point in the AnyBody model, we will not talk here about intradiscal pressure but about force exerted on the disk. 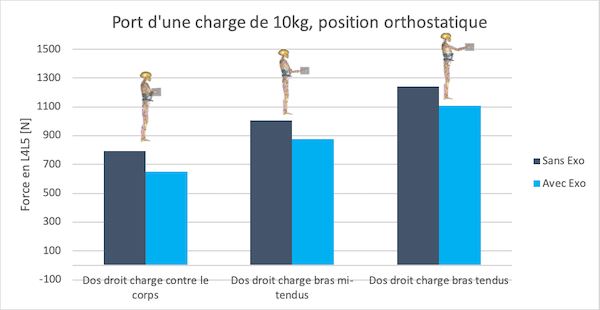 Figure 1: Impact of the exoskeleton on the force exerted on the L4L5 disk
depending on the positioning of the 10kg load.

To evaluate the impact of the exoskeleton’s on the L4L5 disk according to the mass of the load, the model is in an orthostatic position and carries different loads with its arms half extended. The loads are 0kg, 5kg, 10kg, 15kg and 20kg.

Figure 2: Impact of the exoskeleton on the force exerted on the L4L5 disk depending on the mass of the load carried.

Figure 2. shows that wearing the Japet exoskeleton during a load holding session, allows a decrease of 135N (or 13.8kg) on average on the L4L5 disk, whatever the mass of the load.

Impact of the exoskeleton on the L4L5 disk according to the operator’s position during load carrying.

To evaluate the impact of the exoskeleton on the L4L5 disc according to the position of the operator during load carrying, the model supports a 10kg load with half-extended arms for two types of movements: an axial rotation and a forward bending.

Figure 3: Impact of the exoskeleton on the force exerted on the L4L5 disk
when carrying a 10kg load during axial rotation.

The results of the simulation show that the exoskeleton makes it possible to reduce the efforts on the L4L5 disk, no matter the location of the load, the mass of this one, or the posture at the time of the load carrying. However, the device acts more effectively on rotation angles between 0° and 20°, as well as on flexions of less than 45°.

These results are open to criticism since they do not involve real movement from motion capture, but artificially created movement. However, the results obtained are encouraging. It would be relevant to carry out a similar study based on real recordings in a work situation, and on a large scale.

Rasmussen, J. (2009). Validation of a biomechanical model of the lumbar spine. 22nd Congress of the International Society of Biomechanics.

Wilke, H.-J. (2001). Intradiscal pressure together with anthropometric data – a data set for the validation of models. Clinical Biomechanics.

Back to the category : Studies