Case Study – Impact of the Japet.W exoskeleton on Posture

Results of a case study carried out in partnership with a major French energy group on the impact of the Japet.W exoskeleton on posture during manipulation.

Case study: impact of a lumbar exoskeleton on posture during handling

Japet’s research pole in partnership with the ergonomics pole of a major French energy group.

Low back disorders occupy a growing place in industrialised countries. It is estimated that 80% of the current adult population suffers or will suffer from low back pain, with an annual prevalence of 30% (Olivier N., 2016). This frequency has more than tripled in France between 1980 and 2000. Epidemiological studies are very numerous and confirm similar prevalence in the different industrialised countries. Chronic low back pain which is by definition longer than three months concerns 20% of low back pain which represents between 10% and 20% of the population, with the predilection age being between 35 and 45 years.

Low back pain is a major public health problem and a burden for the economy as it generates significant costs of up to 20 billion euros per year in France (Thevenon A., 2015) (Dogan C., 2016). Low back pain is one of the costliest illnesses for businesses. It is responsible for 10% of work interruptions, all sectors combined, and 13% of invalidity claims.

Ergonomists have a very important role because they study workstation risk in order to adapt them to operators. When the adaptation of the workstation is not possible, ergonomists sometimes turn to other solutions such as robotization or implementation of exoskeletons. However, it is necessary to assess the impact of a new solution, before, during and after its implementation. In the literature, the exoskeletons used in the workplace are assistive and prevention devices to reduce the loads on the body and in the different joints. The device that we propose to study is a medical exoskeleton which does not aim to prevent, but to relieve pain to allow keeping workers in employment.  This case study is a first assessment of the implementation of a lumbar exoskeleton on a painful back activity in worplace: lifting heavy objects.

This case study is carried out on an agent at the ENGIE center in Bry-sur-Marne (Paris region, France).. The impact of handling on the spine varies depending on the kind of object to be carried, the height and distance of the loads, the type of grip and the frequency of movement repetition. The case study presented is part of a workplace study conducted by an ergonomist and work psychologist from ENGIE.

This exoskeleton is intended for a population suffering from lumbar pain, and especially pain related to mechanical pathologies. Only one subject was recruited for this case study. Subject provided informed consent. The volunteer ( X years old, Y kg, Z m) suffers from a chronic low back pain.

The exoskeleton worn is a dynamic trunk orthosis which applies vertical traction forces to reduce pressure on the lumbar spine (Japet Medical, France). The device is composed of two belts, one on the hip and one on the lower ribs. These two belts are connected by two sets of actuators positioned on both sides of the body.

The four actuators perform a dual role: preserving the trunk mobility while applying the traction force. Each actuator is connected to the belts by a ball joint and automatically adapts to different heights, allowing to follow the movement of the trunk (Fig. 1). The exoskeleton has four levels of traction force, 4 kg, 8 kg, 12 kg and 16 kg. 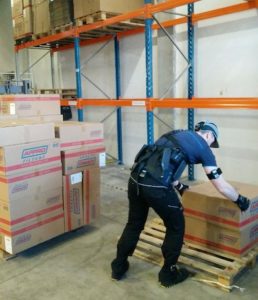 Fig. 1. Japet.W exoskeleton on the subject during handling

Wireless communication between the sensors and the Datalogger (TEA Captiv T-LOG, TEA) allows the subject to be free to move around in a natural and realistic way. The data is immediately transmitted to the computer, allowing to visualise the subject’s movements via the Captiv software (TEA). This software performs an ergonomic assessment for each recording in .pdf format. However, to facilitate processing, the data is retrieved in .csv format to be analysed on Matlab (MathWorks®). 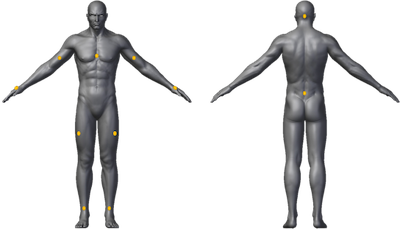 Fig. 2. The yellow dots are at the locations of the inertial measurements units.

A first study of the workstation of a handling operator was carried out by the ergonomist. This workstation can’t be adjusted to ergonomic standards, that is why the ergonomist proposed to test a lumbar exoskeleton in order to relieve his back during his work activities.

After validating the indications for the device with the manufacturer, the ergonomist presented the exoskeleton as well as the course of the study to the volunteer. The operator gave informed consent. Anthropometric measures are collected including weight, stature, hip and under bust circumferences measurements by the ergonomist. These measurements allow to predict the correct device size for the test.

The day of the test, a member of the Japet team and the ergonomist went to the storage shed where the subject works. The subject is quickly briefed on the functioning of the device and the measurements carried out during the test. The subject then tried the exoskeleton to get comfortable with the product and its control interface. The exoskeleton was then removed in order to place the inertial measurement units (IMU). The exoskeleton is then put back to verify that it is not pressing on the IMU.

The test includes three different tasks: discharging cardboard (two pallets are placed on the ground, the subject transfers the cardboard from one pallet to another), storing tyres on shelves (the subject must lift a tyre from the ground to a shelf 1.5m high) and moving a gas cylinder (the subject must lift a gas cylinder from the ground and put it back on the ground 5m further.  The subject is instructed to perform tasks as naturally as possible. The same tasks are repeated without the device and with the device (traction force of 2 kg/actuators).

Six recording are made (Fig. 3). For each of them, the IMU calibration is carried out using Captiv software. To do the calibration, the subject must maintain an orthostatic position, with arms outstretched for 10s. 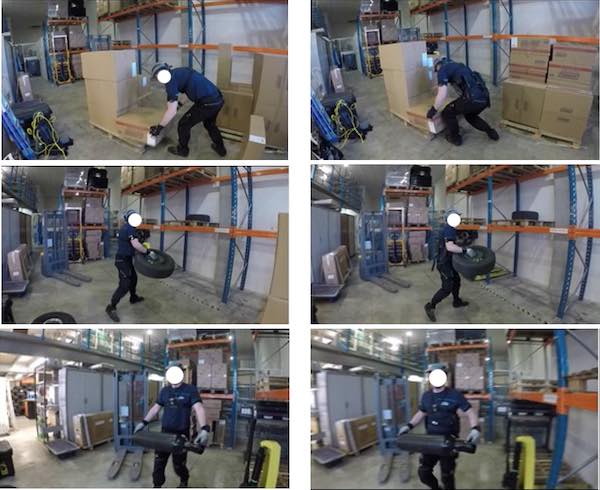 Fig. 3. Photos denoting the 2 conditions for the 3 tasks

Each segment defined by the IMU is assumed to be a rigid non-deformable solid. The connections between the segments are supposed to be perfect without degree of freedom (DOF) in translation. IMU then make possible to assess the angles  formed by the joints of the neck (3 DOF), the back (3 DOF), the shoulders (3 DOF), the elbows (2 DOF), the wrists (2 DOF), the hips (3 DOF) and the knees (2 DOF). We are only interested in the three angles of the back in this study.

During the discharging of cardboard, the acquisition lasted throughout the activity (78s), i.e. several cardboards moved. 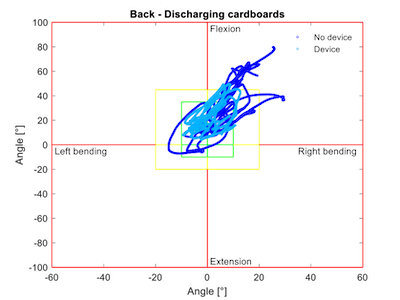 Fig. 4. Scatter plot representing the back angles (flexion extension angles as a function of lateral bending) during discharging cardboard.

The data without the device is more dispersed than data with the device.

The abscissa and ordinate axes have three colors, referring to the three angular areas of the back (Table 1.) commonly used by ergonomists Référence CAPTIV: the comfort zone (green), the risk zone (orange) and the dangerous zone (red).

By comparing the acquisition data with the back angular zones table (Table 3.), it is possible to quantify the percentage of time spent in each zone. To do this, it is necessary to make a postulate on the combinations of angles, which are not considered in this table. We made the decision not to consider the combinations of movements, but to look the three angles independently (flexion extension, lateral bending and axial rotation).

Below is the percentage of time spent in each zone while unloading cardboard: 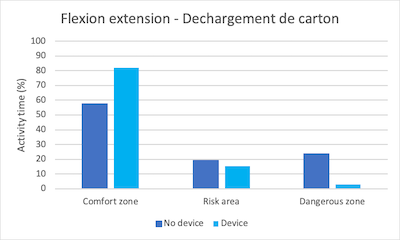 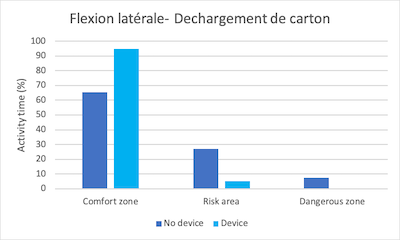 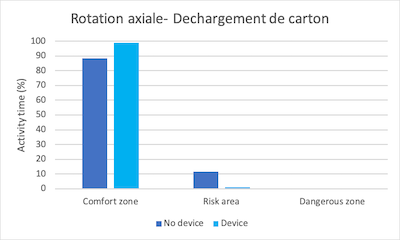 Fig. 5. Percentage of time in the different angular zones during discharging cardboard task

The subject spent more time in the comfort zone with the device than without in flexion extension, lateral bending and axial rotation. He spent less time in risk areas as well as in dangerous areas thanks to the device.

In order not to disturb the operator’s activity, the acquisition was carried out on the storage of two tyres (16s). 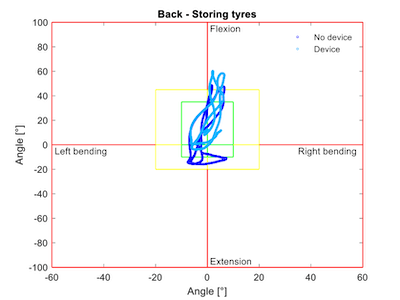 Fig. 6. Scatter plot representing the back angles (flexion extension angles as a function of lateral bending) during storing tyres.

The figure (Fig. 6) does not show a significant difference in dispersion between the curves without and with the device.

The percentage of time spent in each zone of comfort for the storing tyre is as below: 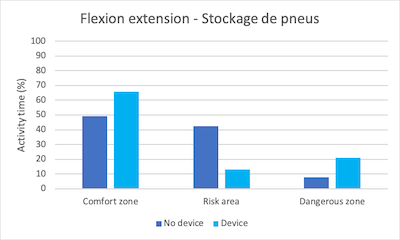 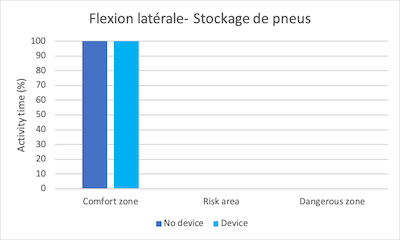 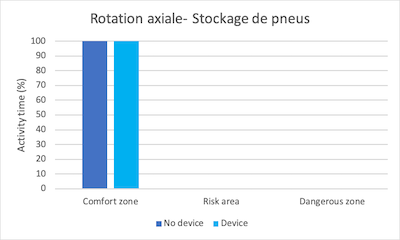 Fig. 7. Percentage of time in the different angular zones during storing tyres task

Finally, with or without the device, the subject spent 100% of the time in the lateral bending comfort zone and in the axial rotation comfort zone.

For the same reasons as the tyre storage test, the acquisition was carried out for the movement of a single gas cylinder (13s). 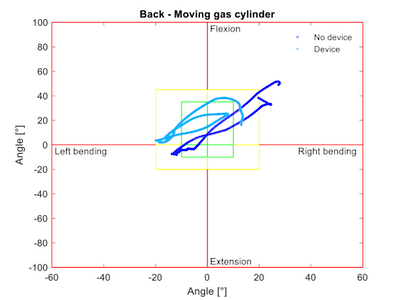 Fig. 8. Scatter plot representing the back angles (flexion extension angles as a function of lateral bending) during moving gas cylinders.

The data with the device seems to be less dispersed than data without the device.

The percentage of time spent in each zone of comfort for the moving gas cylinder is as below: 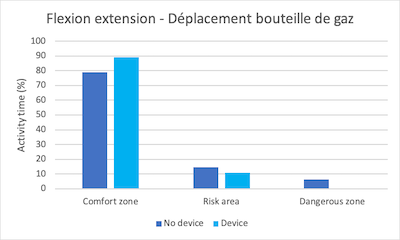 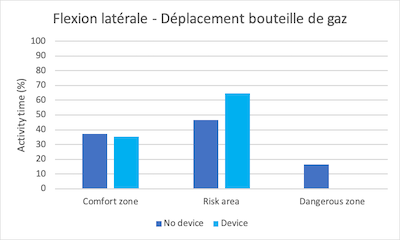 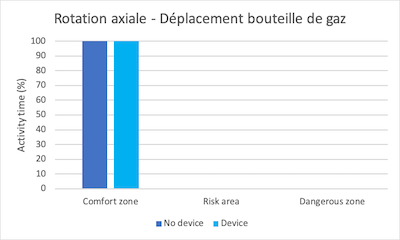 Finally, with or without the device, the subject spent 100% of the time in the axial rotation comfort zone.

The device seems to have a generally positive impact on the postures taken by the operator. Indeed, two graphs out of the nine graphs stand out: the flexion extension movement during the storing tyre task, and the lateral bending during the moving gas cylinder task.

The result of this case study is therefore very encouraging.

However, this preliminary work presents numerous limitations. Firstly, it is a case of study on only one operator. This study should be extended to a larger scale. Secondly, there was little duplication of tasks. Indeed, it is difficult to carry out measurements in a real work situation because the implementation of the protocol necessarily slows down the operator’s work rate. Thirdly, it would be interesting to carry out a whole-body study to analyse the repercussions of the device on the other joints of the body.

This preliminary case study showed that the device has a positive impact on the posture taken by the operator in 88.9% of the time of use. A larger assessment is necessary to confirm this encouraging data.

We thank the volunteer operator and his manager for having spent time to us for this study.

Olivier N., B. J. (2016). Evaluation of muscle oxygenation by near infrared spectroscopy in patients with facioscapulohumeral muscular dystrophy. NeuromusculDisord NMD, 26(1):47-55.

Back to the category : Studies